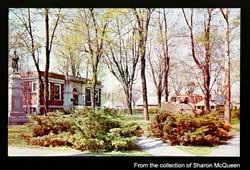 The original Carnegie Library was opened to Delphos residents in 1912. The library was built and furnished for $11,785, in the center of a city park, surrounded by 45 maple trees.

In 1960 a bond issue was passed by Delphos residents to construct a new Library addtion of 8,300 square feet at a cost of $150,000. The first year after this addition was in operation, the Library was open for 60 hours per week. The total number of volumes owned by the Library at this time was 28,447 and the total number of items circulated was 68,501.

Over the years the Delphos Public Library has seen much growth in its services and staff members. The Library was open to the public 60 hours per week in 1998.